The List: Top 10 Heritage Sites with the Most Annual Visitors

Residents and tourists have more than 1,800 historic sites to choose from — ranging from lighthouses to battleships — across the length and breadth of the state.

New Jersey has more than 1,800 locales categorized as “heritage tourism sites” ranging from the Absecon Lighthouse to most of Cape May. According to the state-run New Jersey Historic Trust (NJHT), these sites are “historically significant places that either currently offer (or potentially could offer) a meaningful visitor experience to help visitors better understand New Jersey’s history.”

In 2010, the New Jersey Heritage Tourism Task Force — a group organized by the NJHT — along with Stockton College inventoried all 1,834 heritage tourism sites in the state to figure out just how popular these destinations are.

The most recent data available from a 2012 survey found that nearly 11 million people visited heritage sites statewide. According to the Task Force report, 38 percent of heritage sites are state-owned and funded including 50 historic sites and 12 parks that are overseen by the Division of Parks and Forestry. The state also provides grant programs like the Preserve New Jersey Historic Preservation Fund, Garden State Historic Preservation Trust Fund, and Cultural Trust Capital Preservation Grant Program to fund the sites. The report found that though visitation to historical sites has been up over the past decade, the state’s investment in funding has declined.

The other 62 percent of sites are owned and managed by the counties, nonprofits, federal government, or individual cities and townships. 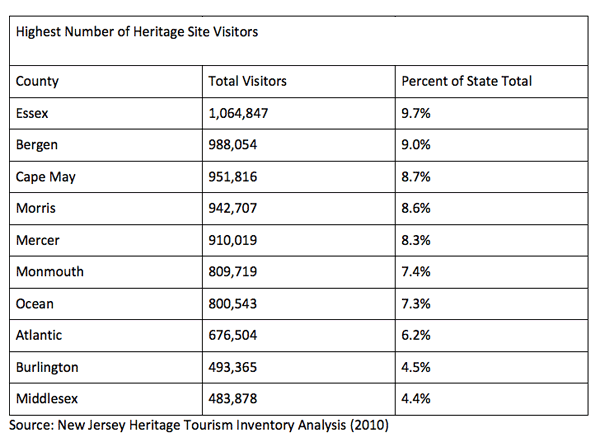 According to the survey, Essex County heritage sites had the most visitors (nearly 1.1 million), followed by Bergen County (1.0 million), Cape May (1.0 million), and Morris County (0.9 million).

In 2004, the New Jersey Legislature allocated a portion of revenues generated from the Hotel/Motel State Occupancy Tax to support four tourism funding areas: New Jersey Council for the Arts ($16,000,000,) New Jersey Historical Commission ($2,700,000), New Jersey Division of Travel and Tourism ($9,000,000), and the New Jersey Cultural Trust ($500,000). Despite inflation, support for the four funding areas has held steady or decreased under the Christie administration. What’s more, revenues have been directed to the state treasury for use in the general fund.

1. Frelinghuysen Arboretum, Morris County: 500,000
The site was built in 1891 as a summer home for Sarah Ballantine Frelinghuysen of the Ballantine Brewing Company family and was dedicated as an arboretum in 1971. The property includes 127 acres of trees (six different varieties), shrubs, flowers, local plants, and nature trails.

2. Fort Mott State Park, Salem County: 500,000
Though it’s now a popular spot for picnics and scenic walks, the park was originally part of a three-fort defense system designed for the Delaware River during post-Civil War modernization in the 1800s. Today visitors can see fortifications erected in 1896 in anticipation of the Spanish-American War.

4.Morristown National Historic State Park, Morris County: 300,000
Another Washington-related site, Morristown National Historic State Park stands on the spot where the Continental army camped during the winter of December 1779 (one of the coldest on record). The Ford Mansion on the property is infamous for its ghost sightings and the park celebrated its 100th anniversary back in August.

5. Battleship NJ, Camden County (also Battleship NJ Museum and Memorial) 400,000
Launched in 1942, the BB-62 was the second U.S.S. New Jersey; during the Vietnam War it was the only U.S. battleship providing gunfire support. The ship also made appearances during WWII, the Korean War, and the Lebanese Civil War. Visitors today can tour the ship to learn about its history and once you’ve got your sea legs, you can opt to spend a night sleeping in the bunks. Battleship reported 250,000 annual visitors; museum and memorial reported 150,000.

6. Double Trouble State Park, Ocean County: 150,000
A prime example of the Pine Barrens ecosystem, Double Trouble State Park was originally a cranberry farm and logging village in the 1860s. Today visitors can kayak and canoe on Cedar Creek and explore the 8,000 acres of trails, bogs, and forests. The name doesn’t come from witchcraft lore but actually from Thomas Potter who coined the phrase after rain washed out his dam twice in one season.

7. Batsto Village, Burlington County: 113,035
Located in Wharton State Forest deep in the Pine Barrens, the iron village can trace its roots back to 1766 when Charles Read built the iron works to forge supplies for the Continental Army. It changed hands over the years before coming into the state’s possession in the 1950s and is now listed as a historic site. Visitors and adventure-seekers probably know it as one of the country’s best-preserved ghost towns.

8. NJ State Botanical Gardens/Skylands Manor, Passaic County: 100,000
The botanical gardens sit at the center of the Francis Lynde Stetson estate he named “Skyland Farms,” in the late 1800s. After being sold to Clarence McKenzie Lewis in 1922, the Stetson house was torn down, and the current Tudor mansion was built in its place. Today, the manor and 96 acres of gardens surrounding it host hikes, tours, concerts, and nature walks.

9. Twin Lights, Monmouth County: 90,000
Built in 1828, the lighthouses were officially called the Navesink Light Station, but sailors referred to it as the Twin Lights. The lenses at the Twin Lights were created in the 1820s by physicist Augustin-Jean Fresnel and are attributed to starting a scientific revolution in America that eventually spawned everything from checkout scanners to solar collectors and fiber-optic cables. In 1893 the first official reading of the Pledge of Allegiance as America’s national oath of loyalty took place at the Twin Lights.

There was an error with your submission. Please verify your information and try again.